Skip to content
close
Use YES10 Coupon to unlock 10% OFF Store Wide.
close

November 5, 2016
In blogspot 0 comment
Last week we told you our story of being part of one of the most expensive properties in Bangalore. This week’s story, in our view, could be considered a milestone in our life.

Bangalore now is a city of many high rises and some of the gated communities are truly world class. 77° East being built by Divyasree, is one such iconic property which is nearing its completion and hand hover.

A large scale property like that usually puts in lot of effort in marketing and they spent quite a lot of money in modeling an empty apartment as a showpiece for the potential buyers. The function of a model apartment is to bring out clearly to a buyer how the apartment looks with furnishing, the functionality of the space and how such an apartment can be furnished up and designed for its optimum usage and visual appearance.

At 77° East, Divyasree chose a 5BHK apartment to showcase it as a model apartment. And in one of the bedrooms, which is ~9 ft x 12 ft in size, they decided to furnish the space with Invisible Bed. Their objective was to demonstrate how to use the same room for various purposes based on need – a bedroom, an entertainment room as well as a guest room.

The pictures below drives home the point very clearly. 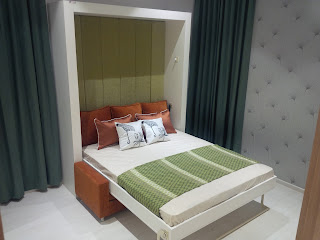 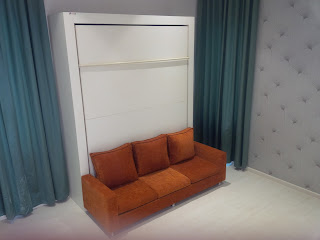 Of course we know that that’s what Invisible Beds are supposed to do – manage your space by giving you freedom in deciding how you want to use it. Now, that even the property developers of high end gated communities are voluntarily showcasing Invisible bed to prove the point, is, lip smackingly, the icing on the cake.

Children’s Bedroom Ideas To Adapt To The New Normal!