Skip to content
Online Products (Except Bed & Sofa) Available for instore pick-up at Bengaluru & Thane with Special discount
Use FLAT10 Coupon Get Extra 10% OFF on orders above Rs.1500/-
Sale Ends in
FREE STUDY LAMP on Orders above Rs.3000 /-

Why rent office space when you have your home?

December 29, 2016
In blogspot 0 comment
43 year old Raman KR is a consultant by profession who could have the luxury of working from his home. However, his home was not work compatible until now…

Mr. Raman owns a 3 bedroom large independent house in Jayanagar and lives with his family of 5.
While his house perfectly fitted his home requirements, it was not suitable to be used as an office.

His guestroom, which measured 8 X 10 SFT and which he wanted to use as his office,  were stuffed with conventional bunker bed and an iron almirah completely cluttering it to make it impossible to use in any other ways.

In his own words “Traditional furniture was not efficient. It occupied lot of space for the utility it offered.”

To avoid taking up a separate office space, which is anyway very expensive proposition in Namma Bengaluru, he decided to convert this less utilized guestroom into his office.  And to do that, all he did was to install our queen size Invisible Bed with itable Max.

Now he not only has an efficient office which he uses daily, but an effective guestroom as well for the occasional guests.
Mr. Raman sums it up well when he says, “"Key reason (for choosing  Invisible Bed) was the space saving design. … your furniture was nicely designed to be sleek yet effective. I could reclaim space which is a premium here. “ 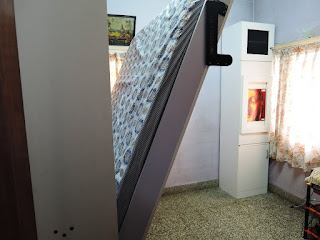 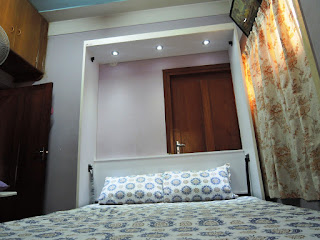 We call you a very Smart Customer, Mr. Raman.
And it was wonderful working with you.
Be Smart like Raman..
Talk to us at 91 80 39510909; and do visit us at http://www.invisiblebed.com/
Compact living, Efficient living, Futur décor, Home office, Intelligent furniture, Intelligent room, Invisible bed, Invisible table, Office furniture, Space management, Space utilisation
Share on Facebook Share on Twitter Share on Email Share on Telegram Share on WhatsApp
Your home is as large as your heartBack to blogspotRent your House and Party There Too!